ang topic namin ngayon sa “The Rebels Without Because” ay tungkol sa poverty at ito ang contribution ko. this isn’t really a poverty post but it’s very close. this is about our struggling years as husband and wife. i’m sure you know the story by now, but i’ll tell it again because it’s a great story. i met jet when i was just out of college, oh maybe 18 years or so ago. i didn’t have any job at that time but i was confident (or maybe even stupid or naive to believe) that i’d immediately get work. our family also didn’t have much and was struggling. i didn’t have any money myself – all i had was my education and a lot of bullshit. well, i did get a job a month after graduating and it paid big: 2,000 pesos. just enough to give my mom some money and expenses to get to and from work. 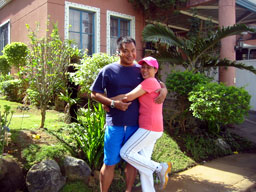 so when jet and i decided to get married, we didn’t have any money. well we did have money – just enough to pay the guy at the kalookan city hall to marry us. i didn’t want to accept any doleout from anybody. well nobody offered really because we were all hard up. but if somebody did offer any money to pay for our wedding, i still would have refused. we also didn’t have any wedding rings because we just didn’t have the money to buy them. i maybe just imagining this now because it was so long ago, but during the ceremony, we were asked about the rings. we couldn’t show any so the guy who married us lent us wedding rings so we’d have something to show during the ceremony.

not that it really mattered because nobody was there except two of my friends who were our witnesses. our parents didn’t attend. we just told them that we were getting hooked at so and so date and they just gave their blessings and well… that was it. no rings, no guests, no family – it was a very simple wedding. 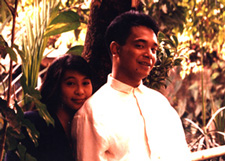 for our reception, jet and i went to jolibee and ordered chicken joy and burgers. we sent our witnesses home because we didn’t have the money to pay for their food. we went home as husband and wife after lunch and went back to work the next day. honeymoon? no money.

and so for the next eight or nine years, jet and i would live in my mom’s house. we had a small bedroom. maybe 8 by 10 feet which was hot as hell during summer. all of our stuff was in that room – a cushion without a bed, one tv and… well, that was it.

then things started to change – after a while my career took off and we were able to save a little. i worked for a company that recognized talent. well, they did give me money to buy a house. i remember when we were house hunting – jet and i went to antipolo to look and she immediately knew the house that she wanted. we signed on the dotted line and it was ours. it was the culmination of so many years of struggle.

if you ask me today if i had a rough time when we were building our lives, i’d probably say i don’t know. it was certainly hard but we were happy. perhaps one of the happiest times in our marriage. what was pleasurable in the struggle? i’m not sure. perhaps because it was fun trying to save enough to buy each other presents with the little that we had. perhaps it was because we were happy looking for coins in the house so we could have enough to buy our groceries. perhaps because it was such an adventure to look for the cheapest food so our savings would last the month. perhaps it was great sleeping with my wife at night in a bed that was meant for one person. we were happy in the struggle because ultimately we know that after all the shit we’d find redemption.

if i had to do it all over again, i wouldn’t change anything. well, there is one thing actually – i’d probably take better care of my teeth. the dental expenses here in california is so fucking outrageous.

40 thoughts on “And if I should fall behind”

This site uses Akismet to reduce spam. Learn how your comment data is processed.